WHAT DO YOU SPEAK?
Singer: Jae Franklin 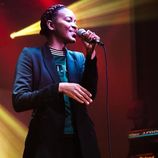 Born and raised in Houston, Texas, Jae’s father exposed her to the blues - the likes of B.B. King and Bobby “Blue” Bland, balanced out with greats like Shirley Caesar and Michael Jackson.
Jae also shared her mother’s love of contemporary pop and soul music, admiring the music of Whitney Houston, Gladys Knight, Patti LaBelle, and Michael Bolton. Today, Jae is inspired by legends like Angelique Kidjo, Jamiroquai, Stevie Wonder, and Sade. It’s no wonder her music sounds the way it does.
Since 2010, Jae has given the world a taste of what’s next. Her voice can be heard on countless collaborations across the web. Her cover of Jamiroquai’s “Morning Glory” was praised by the British band and featured on their official Facebook page. Her collaborations and solo projects have been applauded by esteemed websites like VIBE, MOOVMNT, Sampleface, and Groovement. Her new single ‘Music & Love,’ premiered on reputable websites like Indie Shuffle and URB.
Franklin is well on her way to cementing herself among the soul and pop greats that have influenced her. Her new self-titled EP, “JAE FRANKLIN,” was released on Dec 8, 2017 and features production by Vicente Espi. “JAE FRANKLIN EP” features the lead singles, ‘Skeleton’ and ‘Fools Lane,’ Jae Franklin is set for an impressive year.
FOR MORE INFORMATION ABOUT JAE FRANKLIN:
INSTAGRAM: @JaeFranklinMusic
TWITTER: @JaeFranklin
FACEBOOK: @JaeFranklin